All The Stars and Teeth 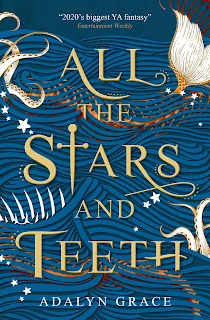 Location: FIC GRA
Genre: Fantasy, Romance
Series: All Stars and Teeth #1
"I love pirates, but have been let down with a lot of the pirate-type books! However, here is one that totally changed my mind! I'll also add that the cover is one of my favorites of the year!Amora was pretty freaking awesome! I easily connected with her and what she was going through and had to face! Then there were the boys! I loved Bastian and Ferrick, especially Bastion, though! And Vataea has my heart! She was vicious and lovable at the same time! The bond between the crew was one that I would want to truly be a part of.All I want in my life right now is to set sail on Keel Haul—that's the ship, by the way! The author put a whole unique spin on the pirate life with wonderful and vivid descriptions that had me captivated from one. Now, give me all the bones and all the magic, and I'm seriously excited for book 2!" Candance

Named as one of Entertainment Weekly's most anticipated books of 2020, Adalyn Grace's All the Stars and Teeth is a thrilling fantasy for fans of Stephanie Garber's Caraval and Sarah J. Maas's Throne of Glass series.As princess of the island kingdom Visidia, Amora Montara has spent her entire life training to be High Animancer - the master of souls. The rest of the realm can choose their magic, but for Amora, it's never been a choice. To secure her place as heir to the throne, she must prove her mastery of the monarchy's dangerous soul magic.When her demonstration goes awry, Amora is forced to flee. She strikes a deal with Bastian, a mysterious pirate: he'll help her prove she's fit to rule, if she'll help him reclaim his stolen magic.But sailing the kingdom holds more wonder - and more peril - than Amora anticipated. A destructive new magic is on the rise, and if Amora is to conquer it, she'll need to face legendary monsters, cross paths with vengeful mermaids, and deal with a stow-away she never expected... or risk the fate of Visidia and lose the crown forever

"THIS BOOK YOU GUYSI was lucky enough to read an early draft of this book because the and i LOVED ITPicture Furiosa from Mad Max: Fury Road leading her own Pirates Of The Carribean ShipThis epic sea adventure empowering as hell, exciting, bloody, and it takes no prisoners! It's also powerful--there are parts of this books that gave me goosebumps.I can't WAIT to read the final draft and then I can't wait for everyone else to read it so we can geek out about it together!!"  Tomi Adeyemi - Author of   Children of Blood and Bone