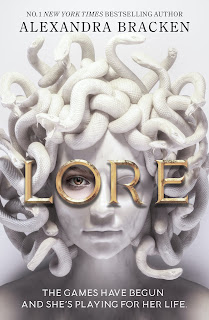 Every seven years, the Agon begins. As punishment for a past rebellion, nine Greek gods are forced to walk the earth as mortals, hunted by the descendants of ancient bloodlines, all eager to kill a god and seize their divine power and immortality.Long ago, Lore Perseous fled that brutal world in the wake of her family's sadistic murder by a rival line, turning her back on the hunt's promises of eternal glory. For years she's pushed away any thought of revenge against the man--now a god--responsible for their deaths.Yet as the next hunt dawns over New York City, two participants seek out her help: Castor, a childhood friend of Lore believed long dead, and a gravely wounded Athena, among the last of the original gods.The goddess offers an alliance against their mutual enemy and, at last, a way for Lore to leave the Agon behind forever. But Lore's decision to bind her fate to Athena's and rejoin the hunt will come at a deadly cost--and still may not be enough to stop the rise of a new god with the power to bring humanity to its knees.From the #1 New York Times best-selling author of The Darkest Minds comes a sweepingly ambitious, high-octane tale of power, destiny, love and redemption.

"Greek mythology meets the Hunger Games in this stunning fantasy standalone from author Alexandra Bracken. Long ago, nine Greek gods rebelled, and as punishment for this rebellion, the Agon was created. Every seven years those same gods would be stripped of their immortality and forced to fight against an onslaught of humans desperate to gain power and immortality in their death. Lora, an outcast from the supposedly wiped out line of the Perseides, is drawn back into the hunt upon the arrival of the famed Athena on her doorstep. Together the two will form a tethered bond, joining unlikely allies in search of revenge, and an end to the Agon forever.

I just want to start by saying how in awe I am of this. This book delivered in every sense of the word, flawlessly executing complex plot and strategy, all while developing the personal relationships amongst the main characters. The writing style is one that slowly took hold, enveloping me within the world like it was greeting an old friend. Upfront there certainly was a lot to digest in order to move forward, but it seemed necessary given the nature of the story and how thoroughly it was explored. The character of Lore, whose complicated past begins to hold power over current events and alliances, is just one example. The internal conflict of her seeking revenge for the death of her family versus escaping from the horrible legacy of the Agon was one of the most compelling aspects of the novel. Bracken surely drew out the revelations to her past in relation to the progression of the hunt and the meaning behind it all. There were definitely moments when I wanted to throw this book at the wall, as I came to terms with yet another expertly placed plot-twist. My only bone to pick with this is that I needed more of a definitive answer as to the point of the Agon. In the concluding events, what was the fate of the gods, and what was Zeus's plan all along? These are questions that needed to be answered for me to really feel like the book had concluded in a finite way. This truly is a book that will take the world by storm, and I look forward to witnessing it in January.