Once and Future Witches 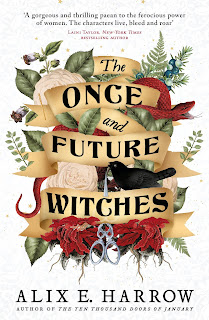 “That’s all magic is, really: the space between what you have and what you need."

“One witch you can laugh at. Three you can burn. But what do you do with a hundred?”

In 1893, there's no such thing as witches. There used to be, in the wild, dark days before the burnings began, but now witching is nothing but tidy charms and nursery rhymes. If the modern woman wants any measure of power, she must find it at the ballot box.But when the Eastwood sisters--James Juniper, Agnes Amaranth, and Beatrice Belladonna--join the suffragists of New Salem, they begin to pursue the forgotten words and ways that might turn the women's movement into the witch's movement. Stalked by shadows and sickness, hunted by forces who will not suffer a witch to vote-and perhaps not even to live-the sisters will need to delve into the oldest magics, draw new alliances, and heal the bond between them if they want to survive.There's no such thing as witches. But there will be

"Harrow's prose is lyrical in her gripping, compulsive and spellbinding storytelling and her world building is stellar. I found myself totally immersed and caught up in the wide range of diverse characters, rooting for the sisters and their allies. One of the best things about the novel is how it echoes so many of our contemporary realities in the modern world and the issues that divide us, it is a thought provoking read on gender, women's rights, race, homophobia, sexuality, survival, feminism and more. This is a brilliant read, that for me felt so meaningful and captured my imagination, I loved all the Eastwood sisters, having to give up everything in order to gain the possibility of gaining everything. Simply wonderful and highly recommended." Pamojet