Ship of Smoke and Steel 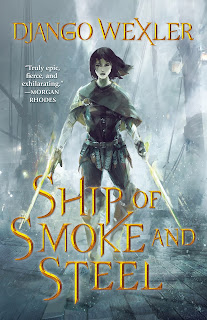 Series: The wells of Sorcery #1

In the lower wards of Kahnzoka, the great port city of the Blessed Empire, eighteen-year-old ward boss Isoka comes to collect when there's money owing. When her ability to access the Well of Combat is discovered by the Empire—an ability she should have declared and placed at His Imperial Majesty's service—she's sent on an impossible mission: steal Soliton, a legendary ghost ship—a ship from which no one has ever returned. If she fails, her sister’s life is forfeit.

"The writing was fantastic, the characters so well fleshed out, the setting was the most unique book I've read in a long time, and the story was action filled and so much fun. I can't wait for the next book in the series. Its fun finding a new author that you enjoy, its like a whole new world to explore, and I think that if its anything like this book then I'll be in for a treat." Rae

"The story is action, action, action. There was never ever a dull moment in this high octane story. This is a Ghost Ship Heist full of mystery and intrigue. I am so into a well plotted Heist and that was this.Django Wexler created and crafted a colorful cast of characters. Isoka is a powerful and confident protagonist and I was rooting for her every flip of the page. Isoka just joined my ranks of favorites. We also have some wonderful side charcters. Meroe, Jack, and Thora are wonderful. They are quite a few others. We also have LGBTQ representation throughout this book from F/F to M/M.This is all I have to say about this first entry into the Wells of Sorcery Trilogy. Congratulations Django Wexler on your debut into the YA genre. The only other thing I could say is how much I am going to hate the wait for book two!!!!!" Travis