The Magpie Society: One for Sorrow

By: Zoe Sugg and Amy McCullough 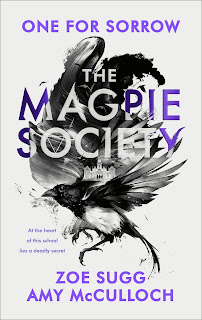 The brand-new fiction book from Zoe Sugg (aka Zoella)! Co-written with the acclaimed writer Amy McCullochSeven for a secret, never to be told . . .Illumen Hall is a boarding school of tradition and achievement. But tragedy strikes when the body of a girl, a student, is discovered - on her back is an elaborate tattoo of a magpie.For new student Audrey, it is just another unsettling thing about her new surroundings. And for her roommate Ivy, well, she's just annoyed she has to share with the new girl from America.As an unlikely friendship develops, the two are drawn deeper into the mystery of this strange and terrible murder. They will discover that something dangerous is at the heart of their school.Welcome to The Magpie Society.Told from two alternating view-points, this is the first book in a modern gothic thriller series that will have you gripped like no other book this year. Get ready for your new YA obsession . .

Author Fun Fact: Zoe Elizabeth Sugg is an English fashion and beauty guru and internet personality. She is best known by her fans and viewers on YouTube as Zoella. She has a secondary channel, MoreZoella, which is primarily for her vlogs. She has collaborated with a myriad of other Youtubers as well as appeared in numerous magazines and won a Teen Choice Award