The Masks of Mirrors 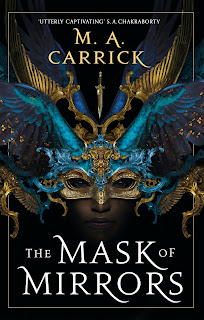 "Ooh, Marie Brennan and Alyc Helms writing an awesome-sounding epic fantasy under a pen name re: 'It has fencing, fighting, torture, revenge, monsters, chases, escapes, true love, and miracles, and we’re only sorry we didn’t manage to get a giant in there; maybe we can make somebody really tall during editorial revisions? Also the kind of worldbuilding that happens when you let two anthropologists off their leashes. It has a con artist, a vigilante, and capers as flirtation. It has normalized queerness and weird dream shit because we love that stuff, yo. It has noble politics and street gangs and deception...'"  review Sana

Tarot readings, magical makeup, sleepless hallucinations, revelations, deception & consequences. The Mask of Mirrors felt like a combination of The Goblin Emperor & Locke Lamora, while staying wholly original. There were also some delightful “Padme’s Handmaidens” vibes, not only because of certain plot points, but mostly because of the gorgeous descriptions of garments.Yet, writer me was in complete awe at the level of attention paid to fabric & intricate costumes of the time, which only added to my enjoyment of this complex fantasy world!

I’ve barely scratched the surface of this slowly burning mystery, truly! It’s set in a queernorm world, with dynamic characterization, stunning prose & twisty turns. Simply put, The Mask of Mirrors is escapism in amongst the chaos...

Fortune favors the bold. Magic favors the liars.Ren is a con artist who has come to the sparkling city of Nadežra with one goal: to trick her way into a noble house, securing her fortune and her sister's future.But as she's drawn into the elite world of House Traementis, she realizes her masquerade is just one of many surrounding her. And as nightmare magic begins to weave its way through the City of Dreams, the poisonous feuds of its aristocrats and the shadowy dangers of its impoverished underbelly become tangled…with Ren at their heart.The Mask of Mirrors is the unmissable start to the Rook & Rose trilogy, a dazzling and darkly magical fantasy adventure by Marie Brennan and Alyc Helms, writing together as M. A. Carrick.