The Kingdom of Back

Something very different from Marie Lu

Truly a beautifully and elegantly woven tale, about Nannerl Mozart, the brilliant sister that time almost left forgotten, & her brother Wolfgang, their secret kingdom, music, faeries, magic, & most of all, love.

Mozart had a sister and a very talented ona at that...

We have just never heard about her, because she was a girl...

I am going to tell you a story you already know. But listen carefully, because within it is one you have never heard before.

What legacy could Nannerl have left if she’d been given the kind of attention and access that her brother enjoyed? What beautiful creations were lost to us forever because Nannerl was a woman? How many other countless talents have been silenced by history, whether for their gender, race, religion, sexual orientation, or socioeconomic circumstances?

Without a doubt, this is Marie Lu's most fascinating book to date. 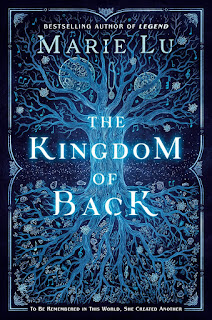 Two siblings. Two brilliant talents. But only one Mozart. Born with a gift for music, Nannerl Mozart has just one wish--to be remembered forever. But even as she delights audiences with her masterful playing, she has little hope she'll ever become the acclaimed composer she longs to be. She is a young woman in 18th century Europe, and that means composing is forbidden to her. She will perform only until she reaches a marriageable age--her tyrannical father has made that much clear. And as Nannerl's hope grows dimmer with each passing year, the talents of her beloved younger brother, Wolfgang, only seem to shine brighter. His brilliance begins to eclipse her own, until one day a mysterious stranger from a magical land appears with an irresistible offer. He has the power to make her wish come true--but his help may cost her everything. In her first work of historical fiction, #1 New York Times bestselling author Marie Lu spins a lush, lyrically-told story of music, magic, and the unbreakable bond between a brother and sister.