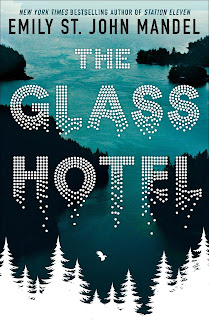 FROM THE STATION ELEVEN AUTHOR COMES....

Vincent is a bartender at the Hotel Caiette, a five-star hotel on the northernmost tip of Vancouver Island. On the night she meets Jonathan Alkaitis, a hooded figure scrawls a message on the lobby's glass wall: "Why don't you swallow broken glass." Leon Prevant, a shipping executive for Neptune-Avradimis, reads the words and orders a drink to calm down. Alkaitis, the owner of the hotel and a wealthy investment manager, arrives too late to read the threat, never knowing it was intended for him. He leaves Vincent a hundred dollar tip along with his business card, and a year later they are living together as husband and wife.

High above Manhattan, a greater crime is committed: Alkaitis is running an international Ponzi scheme, moving imaginary sums of money through clients' accounts. He holds the life savings of an artist named Olivia Collins, the fortunes of a Saudi prince and his extended family, and countless retirement funds, including Leon Prevant's. The collapse of the financial empire is as swift as it is devastating, obliterating fortunes and lives, while Vincent walks away into the night. Until, years later, she steps aboard a Neptune-Avramidis vessel, the Neptune Cumberland, and disappears from the ship between ports of call.

In this captivating story of crisis and survival, Emily St. John Mandel takes readers through often hidden landscapes: campgrounds for the near-homeless, underground electronica clubs, the business of international shipping, service in luxury hotels, and life in a federal prison. Rife with unexpected beauty, The Glass Hotel is a captivating portrait of greed and guilt, love and delusion, ghosts and unintended consequences, and the infinite ways we search for meaning in our lives.

"You may be wondering if The Glass Hotel is anything like Emily St John Mandel’s previous novel Station Eleven? The answer is no. AND yes.Don’t get me wrong, The Glass Hotel is a very different kind of book. Its setting is realistic, not speculative. In place of Station Eleven’s focus on art (Shakespeare, music, comics) there is filthy lucre – specifically a Ponzi scheme bearing a striking resemblance to Bernie Madoff’s massive fraud. The romanticism of Station Eleven – its starlit gauziness and heady atmosphere, beauty seen in a wildflower by the side of a highway clogged with rusted automobile carcasses – is dialled down here. Mandel’s writing is as evocative as ever, but her emphasis has shifted. In this novel full of morally questionable individuals, there aren’t as many pinpricks of light.And yet common threads do emerge. Both books have a diffuse cast of characters; both narratives skip forwards and backwards, orbiting a central catastrophic worldwide event that forever bisects life into a before and an after. Station Eleven’s was a flu pandemic, The Glass Hotel’s is the 2008 financial crisis, which triggers the Ponzi scheme’s collapse. In both, the fallout from the singular event claims lives, and those that do survive are set to wandering.There are more direct links too. Characters from the earlier book reappear here, and the idea of parallel universes – first raised in Station Eleven when characters imagine “a universe in which civilization hadn’t been so brutally interrupted” – also recurs. Mandel ties this to her theme of regret: the characters’ rueful ‘if only’ thinking manifests as reverberations between alternate realities, the ghost versions of lives that might have been, had they made different choices.It’s as if Station Eleven – which had the feeling of a dream all along – is Oz and The Glass Hotel is Kansas. From parallel worlds arise parallel tales, different tonally but at heart, similar compositions. Mandel’s sensitive characterisations, meticulous layers, and musings on loss, regret and the frangibility of life are all here." MARCHPLANE