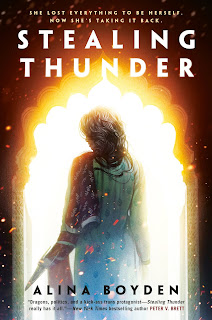 I love things Moughal, having been to India and been to those amazing palaces, photographed the arches, walked the Taj. I loved the book "The Twenthieth Wife" - and I loved walking around Agra Fort afterwards. This book is set in the Mughal time so it is a no brainer from me...

Protecting her identity means life or death in this immersive epic fantasy inspired by the Mughal Empire.In a different life, under a different name, Razia Khan was raised to be the Crown Prince of Nizam, the most powerful kingdom in Daryastan. Born with the soul of a woman, she ran away at a young age to escape her father’s hatred and live life true to herself.Amongst the hijras of Bikampur, Razia finds sisterhood and discovers a new purpose in life. By day she’s one of her dera’s finest dancers, and by night its most profitable thief. But when her latest target leads her to cross paths with Arjun Agnivansha, Prince of Bikampur, it is she who has something stolen.An immediate connection with the prince changes Razia’s life forever, and she finds herself embroiled in a dangerous political war. The stakes are greater than any heist she’s ever performed. When the battle brings her face to face with her father, Razia has the chance to reclaim everything she lost…and save her prince.

I love this review from Peter on Goodreads

"I was in a cab to the Paris airport when my data plan ran out, so I picked up the manuscript for Stealing Thunder. I figured I’d give it 25 pages as a favor to the editor, then watch Marvel movies on the flight.The next thing I knew, we were landing in New York, and I was nearly finished with the book. I remember being resentful that it was too dark to read in the taxi home.I get asked to read a lot of manuscripts, and as a result it has become increasingly difficult to hold my interest. Stealing Thunder was immersive from the very first page. Razia is everything you want in a protagonist. Having given up luxury and power as a crown prince to live life as a woman, the story begins with her in a hijra family with other transsexuals, working as a dancer, prostitute and thief in order to survive.But Razia isn’t one to let the world dictate who she is. Despite living in a culture that abuses and treats trans women as one of the lowest castes of society, she finds a way to have agency and impact, rising to power again not through the privilege of her birth, but by dint of her own intellect, skill, and strength of will.And I haven’t even mentioned the dragons.Her father’s empire is built on the strength of his aerial corps of zahhaks—great serpentine beasts with vibrantly feathered wings, each breed possessing a unique and terrible breath weapon. Stealing Thunder has no shortage of handsome princes and passionate romance, but the greatest love is between Razia and Sultana, the thunder zahhak she raised from a hatchling but was forced to leave behind when she fled her abusive father’s palace to live on her own terms.But as her confidence in her new life grows, Razia becomes determined to steal Sultana back.Dragons, politics, fighting, chases, escapes, thrilling aerial battles, true love, and a kickass trans protagonist, Stealing Thunder really has it all.Worth your time."