All I know now 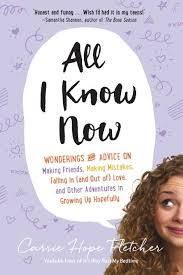 “Don't ditch your childhood dreams just because you dreamt them up as a child.”
― Carrie Hope Fletcher


Carrie Hope Fletcher is a singer-songwriter and an author. She also plays the ukulele, guitar and saxophone.Carrie is well known on YouTube for her channel 'ItsWayPastMyBedtime' where she has over 600,000 subscribers. Most of her videos consist of giving advice to her younger audience, talking about Disney and covering her favourite songs.She played Eponine in the West End production of Les Miserables at the Queen's Theatre until February 13th 2016. She is the first actress to have played both young Eponine and older Eponine.Her debut book, 'All I Know Now: Wonderings and Reflections on Growing Up Gracefully' was published in May 2015. The book is based on what she writes on her blog.Her first fiction novel, 'On the Other Side' is due to be published in July 201

The only thing bigger than Carrie Hope Fletcher’s hair is her heart. But here’s her not-so-secret: This rising star was once a high school misfit.Carrie’s youthful fans come to YouTube to hear her talk music, books, and whatever comes to mind! But when they write to her, they want advice most of all. In All I Know Now, Carrie tackles every tough topic, from how to apologize (“Don’t make excuses but do explain.”) to how to handle bullies (“Punch them in the face. Kidding! Kidding!”).Carrie grew up just one step ahead of her teen and tween fans. She can remember her own awkward phase (all too well!), so she never lectures her readers; she confides in them. Thanks to Carrie’s personal touch—plus 21 of her own illustrations—this generous guide to growing up is as one-of-a-kind as its author!

We need to start treating ourselves how we deserve to be treated, even if you feel that no one else does. Prove to the world you ARE worth something by treating yourself with the utmost respect and hope that other people will follow your example. And even if they don't, at least one person in the world is treating you well: YOU.”
― Carrie Hope Fletcher, All I Know Now: Wonderings and Reflections on Growing Up Gracefully