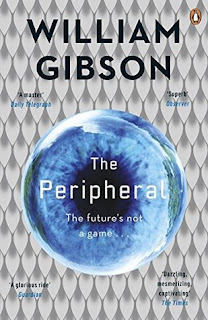 Books with eyeballs on the cover- really- again- why? they creep me out! AND is this some kind of world where Trump is in charge of the USA and Cameron is in the UK not liking each other in our future worlds...

“Because people who couldn’t imagine themselves capable of evil were at a major disadvantage in dealing with people who didn’t need to imagine, because they already were.”

Flynne Fisher lives in rural near-future America where jobs are scarce and veterans from the wars are finding it hard to recover. She scrapes a living doing some freelance online game-playing, participating in some pretty weird stuff. Wilf Netherton lives in London, seventy-some years later, on the far side of decades of slow-motion apocalypse. Things though are good for the haves, and there aren't many have-nots left. Flynne and Wilf are about to meet one another. Her world will be altered utterly, and Wilf's, for all its decadence and power, will learn that some of these third-world types from the distant past can be real badass.

'Fast moving, accessible, instantly gripping, so laden with cliffhangers you become afraid he will run out of cliffs" SFX