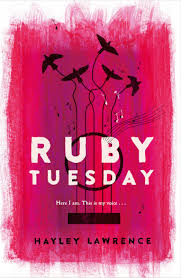 Ruby was named after a song about freedom, but she’s far from free. She’s trapped by her mum’s accident, her past as a famous pianist a distant memory. This was never the plan – both of them invisible and voiceless in a dusty small town. And Ruby wants to be heard.But that was before Joey Milano.Before that awful party.Now the only thing Ruby’s sure of is that she’ll never ever trust anyone again.When the opportunity of a lifetime comes knocking, and a boy from her past reaches out, Ruby’s not fooled. Some things are broken beyond repair.Or are they?

"“Let people talk. What they think of you isn’t your responsibility. Just don’t let them make you feel ashamed. Your worth is your own and you don’t negotiate that with anyone.”I absolutely devoured this book. It was beautifully written and really captured what it’s like to be a girl in high school. I instantly connected with Ruby, she is such a likeable and relatable protagonist. She goes through so much, I just wanted to reach into the book and give her a hug.This is not a light hearted story and there are many triggers. Ruby Tuesday explores death/loss, assault (both physical and sexual), family dynamics and so much more. It was beautiful but heartbreaking and is definitely an important story for young people to read" Liuchy- Goodreads