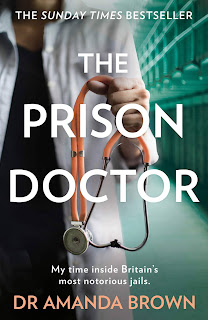 Dr Amanda Brown has treated inmates in the UK’s most infamous prisons – first in young offenders’ institutions, then at the notorious Wormwood Scrubs and finally at Europe’s largest women-only prison in Europe, Bronzefield. From miraculous pregnancies to dirty protests, and from violent attacks on prisoners to heartbreaking acts of self-harm, she has witnessed it all. In this memoir, Amanda reveals the stories, the patients and the cases that have shaped a career helping those most of us would rather forget.

"It’s a quick read, structured and emotional without getting too bogged down in facts or opinions. Dr Brown lets the stories and the people speak for themselves, and I think it’s this simplicity that makes it work so well. It’s certainly brought to my attention a forgotten route in healthcare, and might make me think twice about all those missed appointments we get at work from prisoners who fail to turn up for their MRI scans in the future. The level of responsibility is seriously high too - often Dr Brown has to fight to get her patients admitted to hospital when the prison guards are severely understaffed, or is often the first on scene to a suicide attempt, up to her elbows in blood. It’s high risk, high adrenaline stuff.Fascinating read, that’s made me think above and beyond my own career." Sara