The Conspiracy of Us 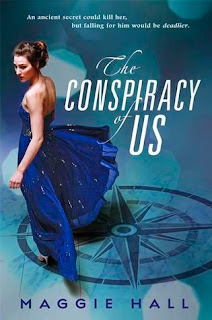 "A fast-paced international escapade, laced with adrenaline, glamour, and romance--perfect for fans of Kiera Cass and Ally Carter"


“Toska.” He leaned forward, too. “It’s a Russian word. It has no translation into any other language, but the closest I’ve heard is the ache. A longing. The sense that something is missing, and even if you’re not sure what it is, you ache for it. Down to your bones.”― Maggie Hall, The Conspiracy of Us

Maggie Hall's debut novel The Conspiracy of Us is a pure adrenaline rush! Suspenseful and unpredictable from the very first page, I was always wondering what would happen next. With secret societies, conspiracy theories, and international locales, what's not to love about The Conspiracy of Us? I also loved the novel's admiration of the beautiful, ancient cities of Paris and Istanbul and their rich sense of history and culture. The Circle of Twelve can trace their origins back to the time of Alexander the Great. From world leaders to Hollywood celebrities, their members are some of the most powerful and wealthy in the world. But this secret society also has an ancient enemy—an organization simply called the Order. Violence between the Circle of Twelve and the Order has recently escalated, and Avery finds herself in the heart of all the trouble when she learns she's the key to a prophecy. Avery only came to Paris to learn more about the father and his family that she's never met, but suddenly, she must race against time to unravel a series of obscure clues that were left behind by a man who's always been a grandfather figure to her. But who can Avery trust? She's right to be suspicious and on her guard—Avery's life is in danger. Both the Circle and the Order would love to either see her dead or use her as a pawn. Amongst strangers in a foreign city, Avery only has Stellan and Jack to rely on, but they both work for the mysterious, shadowy Circle and have their own personal motivations in wanting to help her.
Liz- Goodreads.com