The Loneliness of Distant Beings 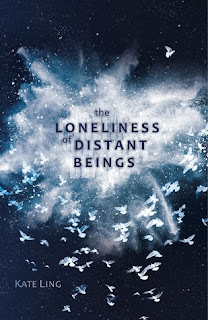 What is  better than having the sun on your face- not a lot. Especially with our gloomy Waikato weather- oh for sun on the face and on your back! What if you needed to feel the sun on you to stay sane- there would not be many sane people in the Waikato that is for sure!

Even though she knows it's impossible, Seren longs to have the sunshine on her skin. It's something she feels she needs to stay sane. But when you're floating through space at thousands of kilometres an hour, sometimes you have to accept there are things you cannot change.

Except that the arrival of Dom in her life changes everything in ways she can barely comprehend. For a while he becomes the Sun for her; and she can't help but stay in his orbit. Being with him flaunts every rule designed to keep their home in order, but to lose him would be like losing herself.

In the end they must decide what is most important: loyalty to the only home they've ever known, or to each other?

"Seren has forever lived with her father, elder sister and grandfather aboard the spaceship, Ventura, travelling at a speed more than one thousand km/hr through the dark space to cover the 700 years long journey to a planet which they are going to inhabit. And the residents of this spaceship need to abide by the rules set by the leader of the ship and disobeying those rules might imperil their freedom in the ship. There are so many systems set on the spaceship that are supposed to make the lives of the residents balanced and organized, like the Breeding Program which is supposed to ensure the heritage and the proper lives of the future generation which is done by the help of the computer, a complete random selection of two partners after their basic graduation. And the residents are supposed to work in the spaceship like in the manufacturing or farming or nursing departments and the teenagers are recruited in one of such department after their graduation.Due to Seren's deteriorating mental health, a.k.a, depression, Seren has been assigned to go see the doctor, where she met the boy, who stole her heart at the very first glance- Dom. Yes, he is the guy who will make her breathe finally in this stale air and will make her chant her name. But there's a slight problem, Seren has been partnered next to the boy, Ezra, who is the spaceship leader's son. And they are supposed to get married soon. And now that Dom has entered her life, it is impossible for Seren to settle with Ezra." Aditi Goodreads.com

“We are responsible for our own survival, for the survival of our species. And it is our duty, every one of ours, to make that our priority.”