The Secret Language of Sisters 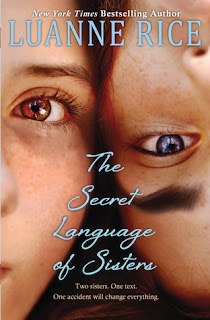 My sister and I never had a secret language- I was probably far to annoying and she probably just wanted me a long long way from her- she would off had to shout!  I am sure though if we had off had a major event occur in our lives we would of been there for each other- and I would like to thin that we would now- she would not need to shout now!

As for texting and driving- it is just stupid and if you don't believe me- read this book to  make it hit home. Pull over people- just pull over if you have to get that text!

When Ruth Ann (Roo) McCabe responds to a text message while she’s driving, her life as she knows it ends. The car flips, and Roo winds up in a hospital bed, paralyzed. Silent. Everyone thinks she’s in a coma, but Roo has locked-in syndrome—she can see and hear and understand everything around her, but no one knows it. She’s trapped inside her own body, screaming to be heard.Mathilda (Tilly) is Roo’s sister and best friend. She was the one who texted Roo and inadvertently caused the accident. Now, Tilly must grapple with her overwhelming guilt and her growing feelings for Roo’s boyfriend, Newton—the only other person who seems to get what Tilly is going through.But Tilly might be the only person who can solve the mystery of her sister’s condition—who can see through Roo’s silence to the truth underneath.Somehow, through medicine or miracles, will both sisters find a way to heal?