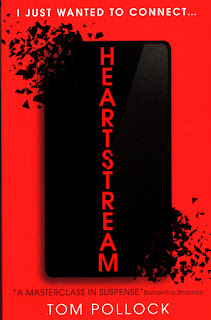 A taut psychological thriller about obsession, fame and betrayal, for fans of Black Mirror

"This book was terrifyingly tense, I felt like I could have been reading a script for a black mirror episode."- Lucy

I just wanted to see you. Before the end. A taut psychological thriller about obsession, fame and betrayal, for fans of Black Mirror. Cat is in love. Always the sensible one, she can't believe that she's actually dating, not to mention dating a star. But the fandom can't know. They would eat her alive. And first at the buffet would definitely be her best friend, Evie. Amy uses Heartstream, a social media app that allows others to feel your emotions. She broadcasted every moment of her mother's degenerative illness, and her grief following her death. It's the realest, rawest reality TV imaginable. But on the day of Amy's mother's funeral, Amy finds a strange woman in her kitchen. She's rigged herself and the house with explosives - and she's been waiting to talk to Amy for a long time. Who is she? A crazed fan? What does she want? Amy and Cat are about to discover how far true obsession can go

"This was such a heart stopping, intense and frantic read, filled with crazed fans and scary obsession. The unsettling premise of the story, coupled with deception and unreliable narrators made this quite the ride!  Anyone who's spent five minutes on Facebook or Twitter could attest to the mob fan mentality, described in the book, being set firmly in reality. A fact that made this book that bit scarier.  The plot twists were fantastic and left me reeling at the end.  Every time I thought I knew where it was headed, there was another surprise around the corner." Jenny