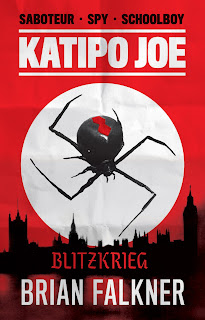 
"I loved this book, while I was reading it all I couldn't help comparing it to Anthony Horowitz's Alex Rider series, its that good." Jo

Young Joe is living in pre-WWII Berlin, with his British father and NZ mother, attending school and witnessing the excitement of his friends who are enthusiastically joining the Hitler Youth Movement.Joe feels uncomfortable with the growing mistreatment of local Jews, and after the arrest of his father as a spy, he is forced to escape from Berlin with his mother. Joe is separated from his mother and evacuated to New Zealand, and, while war looms in Europe, he is frustrated by his distance from the action, and his inability to do anything about finding his father. After a harrowing route back to Europe, Joe attempts to infiltrate the Hitler Youth movement in Germany while at the same time searching for his mother and father in wartime Berlin.

"Joe is a 12-year-old boy living in Berlin in 1938 with his diplomat parents. The Nazis are on the rise, and Joe gets to see firsthand the mistreatment of local Jews, before his world is completely turned upside down. He is shocked to learn that his parents are spies. His father is taken by the Gestapo, and he and his mother only just make it out of Germany.His mother sends him to New Zealand, while she goes to London. Then in 1941 Joe stows away and makes his way back across the ocean in an incredibly dangerous journey. But when he gets to London Joe discovers that the address on his mother’s letters doesn’t exist. Suck in the middle of the Blitz, with bombs falling all around him.Joe spies his mother outside Winston Churchill’s War Rooms, however before he can contact her she is presumed dead in a bombing. But Joe presence hasn't gone unnoticed and he is recruited by MI5 and is sent on a dangerous mission to Paris to infiltrate the Hitlerjugend or Hitler Youth movement to effect an assassination of a prominent Nazi general.This book is very special and I knew it would be..."