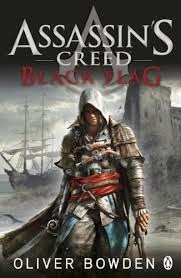 I love Assassins Creed, I love the fact that books based on games based on history are getting you fellas to read and as you do- you are getting sucked into reading. It is so cool, so subtle and cunning, it makes me chuckle. Sucked in and perfect!
So what is this little tempter got in store for you then, it is number 6 in the series and it is all about pirates arrr.
As for me no pirate will ever be better than the Dread Pirate Roberts - why, because beneath his bravado, amazing sword swashbuckling skills, ability to kill rodents of unusual size- he was really a cute romantic- sold out on looove- as you wish!
Lets see if Edward Kenway, the pirate in this novel- topples him. Bet not, it would be inconceivable.

It's the Golden Age of Piracy - a time when greed, ambition and corruption overcome all loyalties - and a brash young captain, Edward Kenway, is making his name known for being one of the greatest pirates of his day. In the brilliant new novel, Assassin's Creed: Black Flag, discover the story of how Edward, a young privateer, became one of the world's most deadly pirates and was drawn into the centuries-old battle between the Templars and the Assassins.