By Glenys Bichan - November 06, 2013
By: Malala Yousafzai and Christina lamb 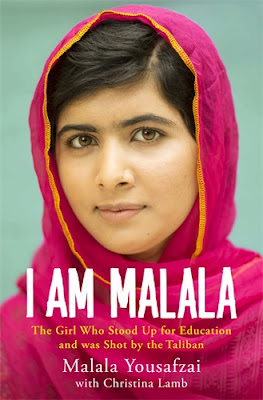 Location: NF 920 YOU
Genre: Heroines of the world who did real stuff with guts and courage!

Ok this blog will get me going.. It is about education and it is about the power of education that changes lives and worlds, it is about the threat of education and knowing that knowledge empowers, and that empowering then can minimise the control forced over us by the powerful.
Education destroys regimes and the regime knows it.
Then- along comes a girl, a courageous young woman called Malala, who refused to allow to her her right to education be stopped by the Taliban, she stood tall, and she refused to be made to submit- she knew education and knowledge were the keys to her freedom, her creativity, and her future ability to provide for herself. She knew education allowed her to think, to ponder, to learn, to then use that to reach her potential, she knew education was a gift that would help her change her world.  She paid the ultimate price, the taliban shot her in the head at point blank range while on the bus riding home from school.
Malala did not die, she fought back, and with her fight comes this story.
This story is how a young woman from a remote Pakistani village is the youngest ever nominee for the Nobel Peace Prize, loved by her parents fiercely in a world that prizes only sons, and it will make you believe in the Power of One, to truly make a difference.
I have seen with my own eyes in the third world, the power and passion of education, the extremes to which people go to sacrifice so their children can learn, I have seen the depth in the eyes of a man talking, determined to make sure his children will be educated, Malala has helped them- she has added voice to their, she has legitimised their determinations in a global way.
Malala- if I had a dinner party and I could invite 4 guests, you would be on my list, I want to hear your story and what it is in your heart and mind that drives you- in the mean time this book will suffice!