Playing TYLER- When a game is not a game! 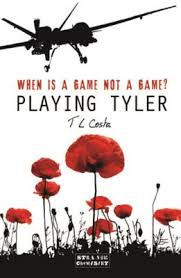 Ok I confess, it was the name on the cover that got me. I know a Tyler and boy they sound similar!
So many reviews of this book say Tyler has "a huge heart" , "endearing"  " a likeable character", "virtous", "high intelligence and a kind heart makes him a lovely soul", "smart and caring", " a fighter", ... and he  has ADHD and Dyslexia.
Hmmm!! Some of you will know where I am going with this!
This book has a hero in it called Tyler, the Tyler I know is also a  genuine hero to me for several of the same reasons- but not all of them, his mum has not checked out mentally, not last time I noticed anyway!

When is a game not a game?

Tyler MacCandless can’t focus, even when he takes his medication. He can’t focus on school, on his future, on a book, on much of anything other than taking care of his older brother, Brandon, who’s in rehab for heroin abuse… again.

Tyler’s dad is dead and his mom has mentally checked out. The only person he can really count on is his Civilian Air Patrol Mentor, Rick. The one thing in life it seems he doesn’t suck at is playing video games and, well, thats probably not going to get him into college.

Just when it seems like his future is on a collision course with a life sentence at McDonald’s, Rick asks him to test a video game. If his score’s high enough, it could earn him a place in flight school and win him the future he was certain that he could never have. And when he falls in love with the game’s designer, the legendary gamer Ani, Tyler thinks his life might finally be turning around.

That is, until Brandon goes MIA from rehab and Tyler and Ani discover that the game is more than it seems. Now Tyler will have to figure out what’s really going on in time to save his brother… and prevent his own future from going down in flames