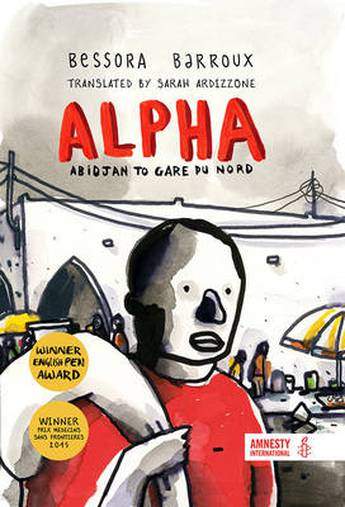 By: Bessora, Barroux and Ardizzone
Location: GRA  BES
Genre: Graphic Novel that will haunt you for the right reasons

A timely and important graphic novel account of one man's desperate journey from North Africa to Europe.
Alpha Coulibaly is emblematic of the refugee crisis today - just one of millions on the move, at the mercy of people traffickers, endlessly frustrated, endangered and exploited as he attempts to rejoin his family, already in Europe. With a visa, Alpha's journey would take a matter of hours; without one he is adrift for eighteen months. Along the way he meets an unforgettable cast of characters, each one giving another human face to the crisis.

"Quite honestly I spent days trying to figure out how to write a review for Alpha and I still don’t know. Emotionally it’s a story that had left me raw, especially the epilogue which just felt like being punched again.

I really want people to read Alpha but I can’t write that it’s beautiful or inspiring. The art is a reflection of the story, it’s grey and bleak. As reader you want there to be hope, something to make all the things Alpha goes through to be worth it. It’s what keeps Alpha and the reader going.

This is a story that I feel people should/need to read. It won’t make you feel happy. It’ll probably make you feel uncomfortable. But that’s a good thing."- Luna- Goodreads.com reviewer