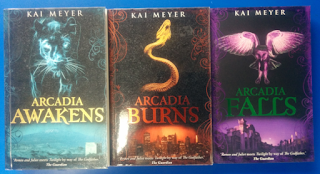 New series and all three arrived at once, so no waiting for the next installment. Its FRIDAY- come and grab all three and read a series for the weekend!

This is written by a German Author which is not to common in New Zealand libraries especially in youth fiction.With millions of books sold worldwide, Kai Meyer is one of Germany's most successful authors. His novels have been translated into 27 languages including English, Spanish, French, Italian, Japanese, Russian and Chinese.
Kai Meyer was born in 1969 in northern Germany. He began college at the University of Bochum, Germany, where he studied film, theatre, and philosophy. Kai wrote his first novel in his early 20s, and it was published when he was just 24 years old. He has been a full-time novelist since 1995. To date, Kai has written nearly 50 books – some for adults, some for teenagers. Kai’s books are mostly historical with strong fantastical overtones. There are over 1.5 million Kai Meyer books in print in Germany, and he is quickly gaining popularity in other countries as well
When troubled teenager Rosa escapes her life in New York to stay with family in Sicily, she stumbles into a sinister Mafia underworld of murder, corruption and bitter, generations-old rivalries. How is handsome, mysterious stranger Alessandro involved? And why is Rosa so powerfully drawn to him?
When Rosa and Alessandro uncover an ancient conspiracy intent on destroying both clans, they will do anything to stop it. Racing to put the pieces together, evading their relatives' murderous feud, and learning what it means to control the most influential families in all of Sicily--the two teens must risk everything to love each other and survive.
On the run from their adversaries and searching for answers, Rosa and Alessandro begin to unravel the secret behind the conspiracy to keep them apart: an ancient prophecy that predicted the destruction of all Arcadia.As the clock ticks down to their own destruction, it's a race against time for the young lovers as they evade murderers, track down clues, and avoid a showdown with the man who wants them dead.The pair must find out the truth behind Arcadia once and for all—but will it be the key to unlocking their freedom and future together, or the final step in bringing them to their knees?