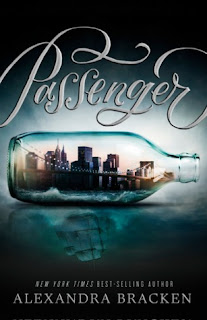 This cover is stunning!


"Pirates, historical settings and time travel! This is pretty much the entire book and I gobbled it up!"- Giselle

"I simply cannot abide the hypocrisy of fighting for a man who supposedly embodies the ideals of freedom, while at home, dozens of slaves work his land."

This book follows Etta Spencer, a 17 year old violin prodigy living in 2015 Manhattan. In one night her entire world is taken from her and she is thrust into an unknown place and time period. This is when she discovers that she is actually a time traveller, and she is a pawn in a game that has been going on for centuries- literally. Now in the year 1776 in the middle of the Atlantic Ocean she meets Nicholas Carter, a young man looking to be the captain of his own life and to be free of his servitude to the Ironwoods- the family that started this dangerous game. When the two meet, a chain of events is set loose that ultimately has the power to rewrite the course of history, and orphan the two from time itself. Etta is an amazing female protagonist. Quick-witted and full of spunk, I loved seeing what she'd do and say next. Nicholas is the perfect counter to her. He's a gentleman through and through, but also cunning and intelligent, capable of anything he sets his mind to. All of the characters in this novel were extremely well-developed. This created a depth to the story that immediately sucked me in. I became emotionally invested, damn it. And now I'm dying for the next book when this one hasn't even been released.The author has done amazing things with this book's multiple settings. No matter where this story took me, she was able to describe it with such imagery that I could see it playing out beautifully. The descriptions were lush, and the writing itself was phenomenal, as always. Secrets will be revealed, betrayals will be made, and Etta and Nicholas will make a perilous journey across centuries and continents to keep the Ironwoods from getting what they desire in this brilliant book that will leave you openmouthed until its knockout, breathless conclusion. Addi- Goodreads.com