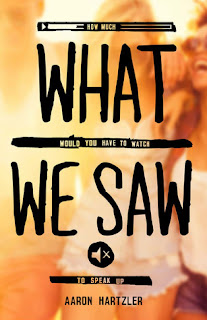 
Its a tough topic, but a topic that needs to be talked about and our students to be  made very very aware of. If you have been on a jury of a date rape case- you will know how heart breaking, how destructive and how complex it is.
Many say books like this NEED to be read by our daughters, our sons and by the caregivers of them. Its a hard read inspired by real events- it happened, it still happens!

A commentator on Goodreads.com started her review on this book in the following way:

Every once in a while I stumble upon a book that reminds me of something my favorite collage professor told us, back then first year literature students, about the art of reading. About it being interactive process. It is not just you holding this seemingly harmless object in your hands, following words on paper and converting them into the pictures in your head. Books can bedangerous things. Break the rules. Bring down oppressive societies. Make people think with their own head and stop being part of the zombiefied mass. Tell the truth. And if you read just so you can escape reality and live in the la-la land of fairy tales (which are again construct of various ideologies), you are burying your head in the sand. Literature shouldn't only make you feel content and happy. Literature has to be brutal. Honest. Cruel. Make you feel angry and horrified.It has to push the lines. Protest and rage.

Kate Weston doesn’t quite remember what happened the previous night she and her friends partied at John Doone’s house. When she wakes up the next morning with a massive hangover, she’s safe in her bed and her truck is parked in the driveway. As she begins to piece together the events of the previous night, she remembers her long-time friend Ben Cody was responsible for getting her home safely. There has always been an underlying connection between these two high school juniors, and after the previous night’s party, Kate takes a chance to see if Ben is open to a relationship.When Kate and her friends head back to school a couple of days later, pictures from the party begin to surface on several social media sites such as FaceBook, Instagram, and Twitter. In the advent of Coral Springs High national basketball tournament, four of Ben’s teammates are arrested for sexual assault and distribution of child pornography… all of which stems from the night they partied at Doone’s house.As the case against the basketball stars escalates, the town begins to see a divide between the victim and her assailants, and Kate is on a quest to uncover what really went on.
Overall, What We Saw is a great novel that refuses to sugar coat what goes on in high school and on social media. To see the consequences of one’s behavior as well as lack thereof is a perfect tale of possibilities that most can appreciate. Hartzler’s novel is well paced, perfectly casted and realistically narrated.