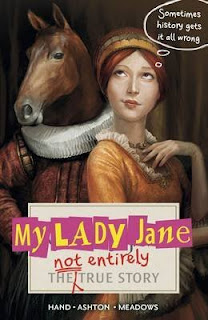 It was amusing. It was romantic. It was slightly based on medieval history. And it was a gem.
I'm dancing like a happy ferret!- Katarina

The Authors: Cynthia Hand, Jodi Meadows and Brodi Ashton.
Think...  Unearthly series, Everneath series and NewSoul series. this is a powerpack of authors collaborating in one book!!! And there are great quotes that make you smirk that flow in this book! It even references Princess Bride with a hint of Jane Austen and  a touch of Monty Python infused through it! What a combo- this book is a combo of combo's!!!

“He pretended to stretch his arms, in order to shift even closer to her. (This isn’t in the history books, of course, but we’d like to point out that this was the first time a young man had ever tried that particular arm-stretch move on a young woman. Edward was the inventor of the arm stretch, a tactic that teenage boys have been using for centuries.)”
― Cynthia Hand, My Lady Jane


So what is this all about...
Meet Jane. She's about to marry a total stranger since her cousin, Edward VI, is dying, and she's next in line for the throne, but all Jane wants to do is read her books. Meanwhile, Edward has problems of his own to worry about - there are plots to overthrow him, he's slowly dying of "the Affliction," and he's never even kissed a girl!
A comical, fantastical and witty re-imagining of the Tudor world, perfect for fans of Pride and Prejudice and Zombies. Lady Jane Grey, sixteen, is about to be married to a total stranger - and caught up in an insidious plot to rob her cousin, King Edward, of his throne. But that's the least of Jane's problems. She's about to become Queen of England. Like that could go wrong.