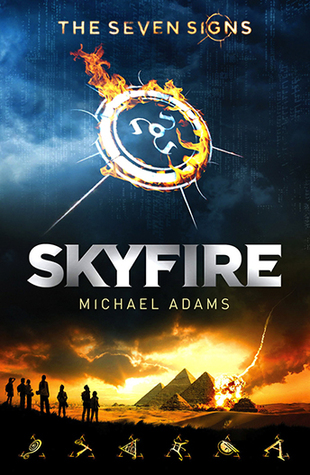 Seven talented and driven teenagers from around the world have been selected by trillionaire Internet King Felix Scott to form an elite group of young people committed to help make a difference in the world. They meet at the ceremony announcing their selection, then their lives are bound together on a quest as they come to realise that each of them has been sent part of a code that predicts an unknown disaster.

Skyfire begins The Seven Signs series where seven young people are entangled in a dangerous and compelling mystery that puts the whole world in danger. It is fun, fast-paced and full of action.

Seven young people have entered a competition that is set to change their lives. As the winners, they are granted the chance to work with the internet and technology king Felix Scott. They are gifted the latest in phone technology, rides aboard space-skimmers and even one million dollars. But as they are named winners they become targets for a cruel and dangerous plot to destroy the world. They each receive a sign, which together they must decode before terror is unleashed on the world


A tension-filled ending (almost a cliffhanger) will have readers eager for the next book in the series. And, luckily for those keen readers, this series will have a rapid release with all seven books released within 13 months.  This is a fantastic book for readers who like a bit of mystery, danger and adventure with their action.-Madison