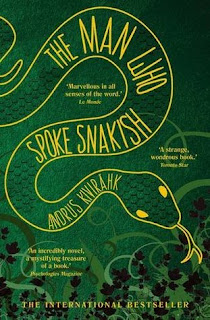 “At that moment it seemed to me that we knew perhaps too much that others didn’t know, and on the other hand too little that was known to everyone else…”

'Marvellous in all the senses of the word" Le Monde

"An incredible novel, a mystifying treasure of a book"- Pschologies Magazine

Andrus Kivirahk is the most popular contemporary author in Estonia, known as a satirical journalist and a bestselling novelist. This novel, which appears to take place in a fantastic version of his homeland during the early middle ages, is his first to be translated into English. It is a thoroughly engaging tale of old ways giving way to modernity, filled with episodes of comic invention, family drama, young love, and the sadness of old traditions giving way to a modernity that offers much but exacts a stiff toll.

Unfortunately people and tribes degenerate. They lose their teeth, forget their language, until finally they're bending meekly on the fields and cutting straw with a scythe. Leemut, a young boy growing up in the forest, is content living with his hunter-gatherer family. But when incomprehensible outsiders arrive aboard ships and settle nearby, with an intriguing new religion, the forest begins to empty - people are moving to the village and breaking their backs tilling fields to make bread. Meanwhile, Leemut and the last forest-dwelling humans refuse to adapt: with bare-bottomed primates and their love of ancient traditions, promiscuous bears, and a single giant louse, they live in shacks, keep wolves, and speak to snakes. Leemet, lives in the forest and follows the old ways of those who can speak a language known as Snakish, which allows them to communicate with snakes and all other animals. But the world is changing, and those of the forest are leaving to settle in villages where they begin to worship God and look up to the Iron Men (knights). Leemet watches as everything around him changes and those of the forest are left to fight to preserve their way of life, and to prevent the old ways from being lost to civilization, religion, and ignorance. Told with moving and satirical prose, The Man Who Spoke Snakish is a fiercely imaginative allegory about a boy, and a nation, standing on the brink of dramatic change.