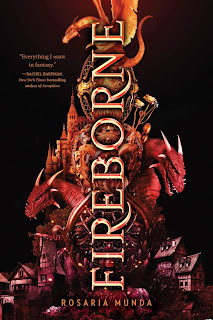 "the story is pitched as Aegon Targaryen and Hermione Granger with dragons, set in the aftermath of a bloody revolution."

Annie and Lee were just children when a brutal revolution changed their world, giving everyone--even the lowborn--a chance to test into the governing class of dragonriders.Now they are both rising stars in the new regime, despite backgrounds that couldn't be more different. Annie's lowborn family was executed by dragonfire, while Lee's aristocratic family was murdered by revolutionaries. Growing up in the same orphanage forged their friendship, and seven years of training have made them rivals for the top position in the dragonriding fleet.But everything changes when survivors from the old regime surface, bent on reclaiming the city.With war on the horizon and his relationship with Annie changing fast, Lee must choose to kill the only family he has left or to betray everything he's come to believe in. And Annie must decide whether to protect the boy she loves . . . or step up to be the champion her city needs

The author was asked what inspirer her to write this on Goodreads and she replied...

Thanks for the question, Taylor! To sum it up: the French Revolution, Plato's Republic, and before either of these, the Blitz. As a teenager I spent a summer commuting an hour and a half to a summer job, listening to an audiobook about the Battle for Britain, imagining dogfights as I drove, the beginnings of a story taking shape. Somewhere along the way, those fighter planes became dragons, and I never looked back.