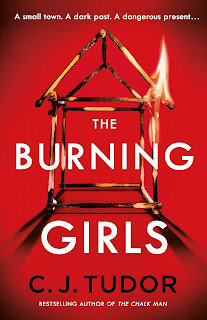 The Burning Girls is a creepy, atmospheric psychological thriller about an insular village with a dark past comprised of religious martyrs, missing girls, and exorcisms.Vicar Jack Brooks and her 15-year-old daughter Flo move from urban Nottingham to a small village in the countryside. As the new Vicar of Chapel Croft, Jack does not find a warm welcome, to say the least. The village is filled with eccentric residents who are covering up scandals from the past, many leading directly back to Chapel Croft. As Flo and Jack make their way in this strange town, their lives are put in imminent danger.

"The greatest gift the devil ever pulled was convincing the world he didn't exist."

“You may not be able to judge a book by its cover, but you can certainly judge a person by their books.”

“That’s the problem with social media. It’s not designed for negatives. It’s all about people showing their best side. Posing with filters, creating some sort of fake perfect life. But what do you do when life isn’t perfect? When everything feels shit. When you feel like you’re sinking into a deep black hole and you can’t crawl your way out. LOFL”

“Who says the devil has to be a man?”

500 years ago: eight martyrs were burnt to death
30 years ago: two teenagers vanished without trace
Two months ago: the vicar committed suicide

For Rev Jack Brooks and teenage daughter Flo it's supposed to be a fresh start. New job, new home. But, as Jack knows, the past isn't easily forgotten.

And in a close-knit community where the residents seem as proud as they are haunted by Chapel Croft's history, Jack must tread carefully. Ancient superstitions as well as a mistrust of outsiders will be hard to overcome.

Yet right away Jack has more frightening concerns.

Why is Flo plagued by visions of burning girls?
Who's sending them sinister, threatening messages?
And why did no one mention that the last vicar killed himself?

Chapel Croft's secrets lie deep and dark as the tomb. Jack wouldn't touch them if not for Flo - anything to protect Flo.

But the past is catching up with Chapel Croft - and with Jack. For old ghosts with scores to settle will never rest . . .


'C. J. Tudor is terrific. I can't wait to see what she does next' Harlan Coben