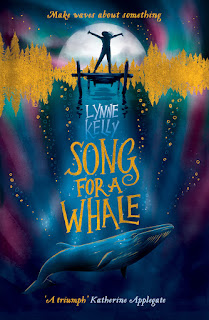 A stirring and heart-warming tale of a young deaf girl who is determined to make a difference, the perfect read for fans of Wonder.

Iris was born deaf, but she's never let that define her; after all, it's the only life she's ever known. And until recently she wasn't even very lonely, because her grandparents are both deaf, too. But Grandpa has just died and Grandma's not the same without him. The only place Iris really feels at home anymore is in her electronics workshop where she loves taking apart antique radios.Then, during a science lesson about sound waves, Iris finds out about a whale who is unable to communicate with other whales. The lonely whale awakens something in Iris. She's determined to show him that someone in the world knows he's there.Iris works on a foolproof plan to help the whale but she soon realises that that is not enough: Iris wants to find the whale herself.One stolen credit card, two cruise ship tickets, and the adventure of a lifetime later, Iris and the whale each break through isolation to help one another be truly heard in ways that neither had ever expected

A bit about the Author

Lynne Kelly's career as a sign language interpreter has taken her everywhere from classrooms to hospitals to Alaskan cruises. Today, she lives near Houston, Texas with her adorable dog, Holly. Her 2019 novel SONG FOR A WHALE, about a deaf girl named Iris who forms an unlikely bond with the “loneliest whale in the world,” has been described as “finely crafted,” “important,” and “uplifting” by reviewers from Publishers Weekly, Kirkus, and School Library Journal. SONG FOR A WHALE received the 2020 Schneider Family Book Award and was named one of the best books of the year by New York Public Library