The Other Side of The Sky 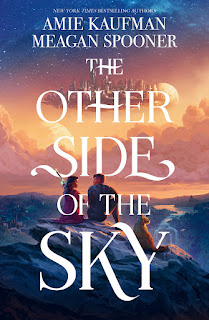 By: Amie Kaufman and Meagan Spooner

Prince North’s home is in the sky, in a gleaming city held aloft by intricate engines, powered by technology. Nimh is the living goddess of her people on the Surface, responsible for providing answers, direction—hope.North’s and Nimh’s lives are entwined—though their hearts can never be. Linked by a terrifying prophecy and caught between duty and fate, they must choose between saving their people or succumbing to the bond that is forbidden between them

"An interesting start to another series by this prolific author. I am struggling to keep up and to remember which series is which, but I am not complaining!The story is told in alternating chapters by the two main characters, Nimh who lives on the ground and North whose home is in a city in the sky. They have nothing in common and everything is stacked against them but, in the manner of the best romances, they fall in love anyway.The world building is excellent and Kaufman draws a great picture of life on the surface, with a poverty stricken people who suffer from a lack of civilisation and a belief in a magic system which is failing them. North arrives from the civilised city in the sky just as Nimh's people are being led into an uprising.There follows much running and hiding, attempts to discover vital secrets, deaths, duplicity, magic mists, and a wonderful cat. All very entertaining. The book finishes on a cliff hanger - now we have to wait for the next one." Phrynne