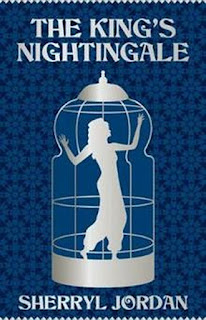 An epic fantasy set in a land of sultans and kings, sumptuous palaces... and slave markets. When Elowen and her brother are seized by pirates and sold, separately, in the slave market of a distant land, Elowens enduring resolve is to escape, rescue her brother and return home. Sold to a desert ruler who admires her sublime voice, Elowen is given the title of the Kings Nightingale. Honoured by the king, and loved by his scribe, Elowen lives a life of luxury, until she makes a fateful mistake and finds herself sold to a less charitable master.

This is a novel about a white woman sold into slavery in a nation modelled on Islamic northern Africa, so finishing it on the anniversary of the Christchurch mosque attacks was a trip. I'm pleased to report that however awkward and out-of-step with the times that setup may be, Jordan, a favourite of my childhood, spares no culture or religion the rod, nor does she fail to see beauty and light in their various corners. This is a tale that acknowledges complexity and the value of good principles in a society full of iniquities. And it's admirable and worthwhile to pave a graceful path for those who dedicate themselves to those principles, and their own inner strength, however little power they wield -- even if the real-life events on which Jordan bases her tale would see such characters lose their heads very quickly. Aspirational, hopeful literature for young teens, with enough of the sharp edges of life left in.