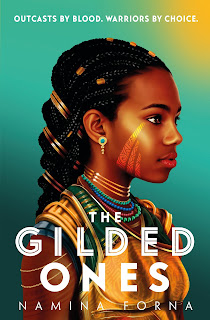 “No matter my origins, there is worth in what I am.”

Sixteen-year-old Deka lives in Otera, a deeply patriarchal ancient kingdom, where a woman's worth is tied to her purity, and she must bleed to prove it. But when Deka bleeds gold - the colour of impurity, of a demon - she faces a consequence worse than death. She is saved by a mysterious woman who tells Deka of her true nature: she is an Alaki, a near-immortal with exceptional gifts. The stranger offers her a choice: fight for the Emperor, with others just like her, or be destroyed..

"Such a good fantasy debut!!! This was brutal, blood was shed at every turn! I don't think I've read a character with as much power as Deka. Very creative history, cannot wait for more!" katie

"YA fantasy has burned me in the past, but this one has lit my fire, watered my crops and made me dinner.If you're feeling a little jaded by YA, give this one a try.You won't be disappointed." Laurel

"This was such a bloody, violent, harrowing, brilliant book. It was a really anticipated release in 2020, the year that all my anticipated releases disappointed me, and it felt so, so good to finally break the cycle with the beautifully written feminist fantasy.While this is a fantasy story with some romance, this manages to not feel like any YA fantasy I have ever read, and does not focus on the romance while still being a great romance. The bigger focus is on Deka bonding with her sister warriors, and discovering more about herself and her strange ability to control the deathshrieks, the enemy.This is an incredibly violent book. Demon girls can heal, only dying when they experience their final death - be it dismemberment, drowning, or stabbed in the stomach, their final death seems to be randomly chosen. When Deka is found out to be a demon, her village tries everything to find it, beheading, dismembering, she survives this for months before being rescued and sent to train as a warrior.This entire story is quite fast paced, but months go by as Deka trains and becomes stronger. I did feel that the story was completely told in this one book, but there appears to be a sequel of sequels. I sense that there may be a POV switch for the next book, but we'll see!" Vee