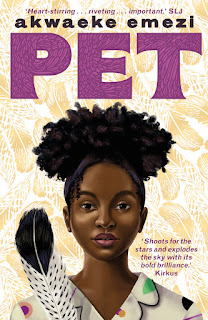 Pet is here to hunt a monster.
Are you brave enough to look?

There are no more monsters anymore, or so the children in the city of Lucille are taught. With doting parents and a best friend named Redemption, Jam has grown up with this lesson all her life. But when she meets Pet, a creature made of horns and colours and claws, who emerges from one of her mother's paintings and a drop of Jam's blood, she must reconsider what she's been told. Pet has come to hunt a monster, and the shadow of something grim lurks in Redemption's house. Jam must fight not only to protect her best friend, but also to uncover the truth, and the answer to the question-How do you save the world from monsters if no one will admit they exist?In her riveting and timely young adult debut, acclaimed novelist Akwaeke Emezi asks difficult questions about what choices a young person can make when the adults around them are in denial.

THIS WAS GREAT. Somewhat repititive despite being short, but with some very powerful messages regarding family, identity, choices, justice and abuse.

Pet is an own voices book about a trans main character however, where the author is non-binary, Jam identifies as female. Pet is set in a contemporary fantasy world where angels once battled the monsters and overcame them. The terms are used as allegories for the kinds of humans there can be, which I think is a pretty interesting move on the author's part.

Jam is a great main character but I really loved Redemption's character the most. He's also probably the most developed and complex one but Pet of course, outshines everyone else. Jam's support system is great and I loved her parents right away. Redemption has three parents one of whom is non-binary, which was also great to see.

What I particularly liked about Pet is how it's a world that's basically a utopia to the extent that those are more abstract concepts than anything that was ever really real. Obviously, that changes which is the whole point of Pet but as a utopia, Pet totally works and for that, I'm appreciative." Sana - Goodreads