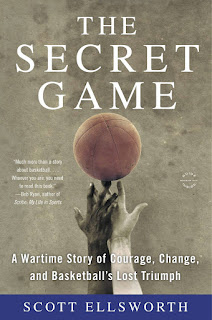 "The Secret Game was a basketball game played in 1944 between an all-white Duke Medical Student team and the team from North Carolina College for Negros, now NCCU. The game is one chapter of the book - that's really not what the book is about. But it's a shaggy dog story that takes themes that tie together in the game - people's lives, Jim Crow laws, the amazingly bad way that African Americans were treated and the sub-culture that resulted. This book is a slap in the face, a sharp reminder of how badly Americans treated Americans only decades ago. And for that reminder, the book is brilliant and needs to be read. It's well written - one of those pieces of history (and this is a history book) that's a page turner while it's building its themes. It's also a vital reminder of how closely below the veneer of everyday life hate lies in human cultures. It's not a heavy book, not preachy, just good. And definitely worth reading. Very highly recommended, even to non-basketball fans."- Ross from Goodreads

Winner of the 2016 PEN/ESPN Award for Literary Sports Writing: The true story of the game that never should have happened -- and of a nation on the brink of monumental change.In the fall of 1943, at the little-known North Carolina College for Negroes, Coach John McLendon was on the verge of changing basketball forever. A protégé of James Naismith, the game's inventor, McLendon taught his team to play the full-court press and run a fast break that no one could catch. His Eagles would become the highest-scoring college team in America -- a basketball juggernaut that shattered its opponents by as many as sixty points per game.Yet his players faced danger whenever they traveled backcountry roads. Across town, at Duke University, the best basketball squad on campus wasn't the Blue Devils, but an all-white military team from the Duke medical school. Composed of former college stars from across the country, the team dismantled everyone they faced, including the Duke varsity. They were prepared to take on anyone -- until an audacious invitation arrived, one that was years ahead of anything the South had ever seen before. What happened next wasn't on anyone's schedule.Based on years of research, The Secret Game is a story of courage and determination, and of an incredible, long-buried moment in the nation's sporting past. The riveting, true account of a remarkable season, it is the story of how a group of forgotten college basketball players, aided by a pair of refugees from Nazi Germany and a group of daring student activists, not only blazed a trail for a new kind of America, but helped create one of the most meaningful moments in basketball history.