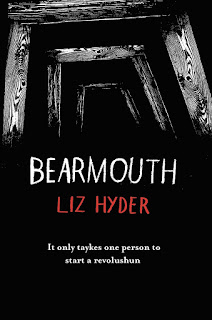 "A stunning YA debut. Claustrophobic, dark and yet filled with hope. Newt has the most unique narrator’s voice I have read in a long time."- Peter

Life in Bearmouth is one of hard labour, the sunlit world above the mine a distant memory. Reward will come in the next life with the benevolence of the Mayker. Newt accepts everything - that is, until the mysterious Devlin arrives. Suddenly, Newt starts to look at Bearmouth with a fresh perspective, questioning the system, and setting in motion a chain of events that could destroy their entire world.In this powerful and brilliantly original debut novel, friendship creates strength, courage is hard-won and hope is the path to freedom.

"I read this in a state of high tension, finding myself unable to put it down as I became increasingly worried about what was going to happen to our main character, Newt. Newst is a unique and immediately-engaging protagonist as s/he introduces you to the dark and claustrophobic world of Bearmouth mine, where men work for years without ever seeing the light of the sun or going aboveground. Humans are being punished by the Mayker, destined to stay underground until there is a sign that they are forgiven and can come back up to the surface. Life in Bearmouth is tough, full of the tension between people forced to live in close quarters, unexpected cave-ins and illnesses caused by inhaling the coal dust.This is unlike anything else I have read before and I was completely gripped!" Christina0- Goodreads