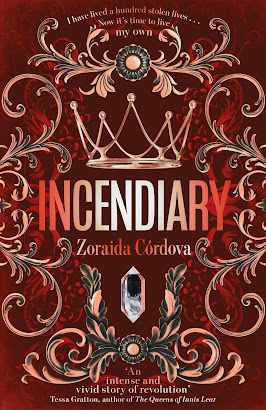 Incendiary was an action-packed fantasy set in a world inspired by 15th century Spain, reimagining the Inquisition.

I have lived a hundred stolen lives.Now I live my own.Renata Convida was only a child when she was kidnapped by the King's Justice and brought to the luxurious palace of Andalucia. As a Robari, the rarest and most feared of the magical Moria, Renata's ability to steal memories from royal enemies enabled the King's Wrath, a siege that resulted in the deaths of thousands of her own people.Now Renata is one of the Whispers, rebel spies working against the crown and helping the remaining Moria escape the kingdom bent on their destruction. The Whispers may have rescued Renata from the palace years ago, but she cannot escape their mistrust and hatred--or the overpowering memories of the hundreds of souls she turned "hollow" during her time in the palace.

When Dez, the commander of her unit, is taken captive by the notorious Sangrado Prince, Renata will do anything to save the boy whose love makes her place among the Whispers bearable. But a disastrous rescue attempt means Renata must return to the palace under cover and complete Dez's top secret mission. Can Renata convince her former captors that she remains loyal, even as she burns for vengeance against the brutal, enigmatic prince? Her life and the fate of the Moria depend on it.But returning to the palace stirs childhood memories long locked away. As Renata grows more deeply embedded in the politics of the royal court, she uncovers a secret in her past that could change the entire fate of the kingdom--and end the war that has cost her everything.

"I found the whole tale engaging from start to finish and appreciated the original elements Cordova brought to her book which really sets it apart from other fantasies. The action gets going pretty much immediately which allows your attention to be captured from early on yet the story doesn’t lack plot or character development either despite throwing you in at the deep end. The twists that are interspersed throughout are well thought out with some of them really taking me by surprise and there is also an emotional side to it all. A compulsive and fascinating opening instalment has me lusting after the sophomore offering already. Highly recommended." Lou