The End of The World is Bigger than Love 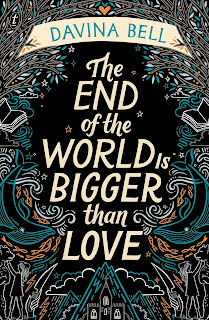 “We live on a blue planet that circles around a ball of fire next to a moon that moves the sea, and you don’t believe in miracles?”

She said we didn’t know what the world out there had become. We had been alone there so long on that tiny island, in that tiny church.
But in the night, I couldn’t bear it.
My chest beat like wings.Identical twin sisters Summer and Winter live alone on a remote island, sheltered from a destroyed world. They survive on rations stockpiled by their father and spend their days deep in their mother’s collection of classic literature—until a mysterious stranger upends their carefully constructed reality.At first, Edward is a welcome distraction. But who is he really, and why has he come? As love blooms and the world stops spinning, the secrets of the girls’ past begin to unravel and escape is the only option.A sumptuously written novel of love and grief; of sisterly affection and the ultimate sacrifice; of technological progress and climate catastrophe; of an enigmatic bear and a talking whale—The End of the World Is Bigger than Love is unlike anything you’ve read before.

"Deposited on an island, twins Summer and Winter try to survive and make sense of their world. Fast talking Summer's narration pulls you through the constantly shifting story, but perhaps it is Winter's tale all along.

Is it a treatise on love? Is it a Big Tech dystopia? Is it a survival story? Or is it an ode to the materially wealthy but terribly lonely child of professional parents? Definitely worth a read, make of it what you will."Maria