The Left Handed Booksellers of London 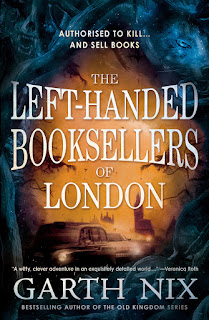 By: Garth NixLocation: FIC NIX
Genre: Urban Fantasy, Historical Fiction
In a slightly alternate London in 1983, Susan Arkshaw is looking for her father, a man she has never met. Crime boss Frank Thringley might be able to help her, but Susan doesn’t get time to ask Frank any questions before he is turned to dust by the prick of a silver hatpin in the hands of the outrageously attractive Merlin.Merlin is a young left-handed bookseller (one of the fighting ones). With the right-handed booksellers (the intellectual ones), he belongs to an extended family of magical beings who police the mythic and legendary Old World when it intrudes on the modern world, in addition to running several bookshops.Susan’s search for her father begins with her mother’s possibly misremembered or misspelled surnames, a reading-room ticket, and a silver cigarette case engraved with something that might be a coat of arms.
Merlin has a quest of his own: to find the Old World entity who used ordinary criminals to kill his mother. As he and his sister, a right-handed bookseller named Vivien, tread in the path of a botched or covered-up police investigation from years past, they find their quest strangely overlaps with Susan’s. Who or what was her father? Susan, Merlin, and Vivien must find out, as the Old World erupts dangerously into the New.
"Garth Nix's The Left-Handed Booksellers of London is one of those young adult novels that easily makes the crossing to adult reading. Set in a version of 1983 London, where the worlds of the ordinary and the magical, the present and ages past, overlap. The Left-Handed Booksellers of London follows the journey of Susan Arkshaw, 18 and about to begin art school, on a hunt for a father she's never known, as she's flung into the dangers of that magical world in the space of a few hours.What makes this novel a good adult read, as well as a good YA one?• A complex ethical substrate that leaves the reader with relatively few fully bad or fully good characters (though there are some) and that poses open-ended questions.• A playfulness with gender that is both affirming and thought-provoking.• Characters who know how they want to live their lives and work to build those lives with integrity and imagination.All that said, this is not a "heavy" read. It's one of those books you'll find yourself staying up late to finish—and not regretting that choice the next morning.This novel works as a stand-alone, but I'm hoping Nix has some ideas for sequels percolating. I would gladly spend more time in Susan Arkshaw's London."- Sarah Hope