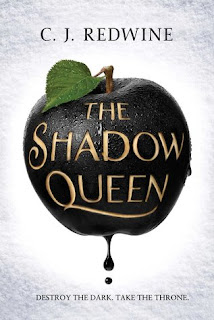 "The Shadow Queen is a retelling of Snow White, except that Snow White is a magic-wielding gravity-defying ninja and the huntsman/Prince Charming is a fire-breathing dragon with a weak spot for frat parties"  Helen has this summed up pretty well I reckon!

Redwine weaves the story of Snow White into a fascinating fantasy. She fleshed out the land and created additional kingdoms, magic and DRAGONS! The world building was done well allowing me to understand and see the lands of Ravenspire and beyond. The story begins with Irina's marriage to the King and it was dark and delightful. Lorelai Diederich is the princess of Ravenspire and its rightful Queen. She has spent years hiding as a fugitive and watching Queen Irina destroy her beloved kingdom. The princess has lived in the woods and mountains of Ravenspire, along with her younger brother and a former guard who has pledged his loyalty to protecting the true Queen. Lorelai was strong, passionate, and developed into a kick-ass heroine as the story progressed. I loved that she shoved her pain aside and thought of the kingdom. In the Shadow Queen, there are no dwarfs, but Redwine does give us a huntsman and dragons. The neighboring kingdom is Eldr. After his parents and older sibling are attacked and killed by ogres, Prince Kol suddenly finds himself King of Eldr and need of magical assistance. Kol’s people are shifters and Redwine brilliantly fed us information about him and his kingdom. Kol did not have an easy time, and I admired his courage, internal struggles and growth. There is a romance in the Shadow Queen that developed from attraction and circumstance but was bound in trust. I love that Redwine did not wrap this up in a bow instead; she left the reader hopeful and smiling. Redwine knows how to weave a story from the romance to the intense action scenes and battles I found myself immersed within its pages. Nothing felt rushed and the darker aspects she brought to the story thrilled me. She stayed true to many aspects of this classic but placed her own stamp on it. I find myself anxious to return. - Kimberley Goodreads.com