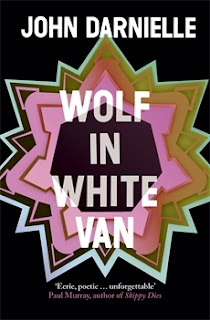 
"It’s the sort of book you read in three hours and then think about it for ten".- Kinga

Forever is a question you start asking when you look at the ceiling. It becomes a word you hear in the same way that people who associate sound with color might hear a flat sky-blue.

The book introduces Sean Philips, who at the age of 17 suffered a serious accident - one which has left him permanently disfigured,and turned him into a recluse who has retreated into the world of fantasy. But during his recovery Sean has invented a role-playing game which he called Trace Italian, which became his source of income. Trace Italian is an RPG which is played through snail mail, and where players journey through a post-apocalyptic wasteland. Each player picks a move from the list of options and sends it to Sean, who in turn develops the story for them and sends a letter back with new moves to choose. Everything is going fine until two high school students from Florida, Lance and Corinne, turn the game into real-life, and Sean is called to personally account for it.

Amazing. One of the best books of 2014. 207 mesmerizing pages that I read in 3 sittings. I have never read anything like this. Big ideas that don’t shout. At once gentle and brutal, Wolf in White Van tells a story about a teenager—a fantasy lover, a gamer, sort of a loner—who approaches the edge of inner darkness and keeps going.- Julia