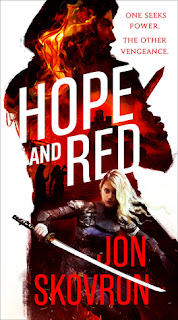 Pirates... we are on a roll with pirates at the moment. This one has females pirates- Sarah Bichan- you need to read this book!

This is a swashbuckling,  kung fu, pirate, romance... trilogy!

In a fracturing empire spread across savage seas, two young people from different cultures find common purpose. A nameless girl is the lone survivor when her village is massacred by biomancers, mystical servants of the emperor. Named after her lost village, Bleak Hope is secretly trained by a master Vinchen warrior as an instrument of vengeance. A boy becomes an orphan on the squalid streets of New Laven and is adopted by one of the most notorious women of the criminal underworld, given the name Red, and trained as a thief and con artist. When a ganglord named Deadface Drem strikes a bargain with the biomancers to consolidate and rule all the slums of New Laven, the worlds of Hope and Red come crashing together, and their unlikely alliance takes them further than either could have dreamed possible

"Hope and Red is the perfect escape for fantasy fans looking for a fun, entertaining and action-packed adventure. I can’t wait to read the next book in the trilogy."- Mogsy