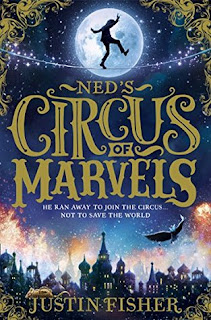 You follow a young boy, Ned, who just turned 13 enter into a world of magical, crazy creatures that live in secrecy to the 'normal' human world. However, as soon as Ned turned 13, his boring old Dad wanted to bring him to the circus as a present but their path is blocked by evil clowns, yes there are actually evil clowns in this story, which turns into a wild chase. This is just the beginning for Ned though as he is forced to hide within a circus troupe. Throughout his adventure he meets a gorilla who ends up being his roommate, an old fortune teller who LOVES Hello Kitty and the ringmaster who is one a kind. The people he meets isn't the only thing he can wrap his head around, the circus can fly and there is a war to be won, with the evil clowns involved which makes it a tiny bit more scarier for young Ned- Cassandra


Ned Waddlesworth has always considered his world to be exceptionally ordinary. Until the day he discovers it ISN’T. AT ALL. Because on Ned’s thirteenth birthday he discovers that everything magical he’s ever read about or imagined is REAL.
And without him, the world will soon be engulfed in monstrous beasts and beings.
So with the help of a robot mouse, a girl witch and a flying circus unlike any other, it’s up to Ned to swoop in and save the day!
Roll up, roll up, and prepare to be AMAZED by Ned and the marvelous, magical, monstrous flying circus!

It's the characters that make this into such an enchanting and enthralling world to escape into, and they do feel somehow...REAL.      HB