Try Not To Breathe 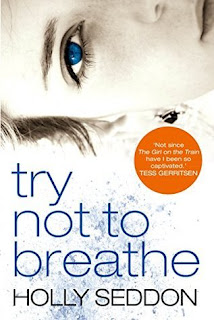 "Try Not to Breathe by Holly Seddon is an intense psychological thriller which kept me enthralled to the very end."


“Fear was the undercurrent, always threatening to whip his legs from under him. Fear was a secondary heartbeat only he could hear, that could get so quiet it was almost imperceptible, or so loud it drowned everything else out.”

Brenda reviewed this book this way
"Amy Stevenson was only fifteen years old when it happened; her abduction in 1995 was the talk of the town and headlines in the newspapers for a long time afterwards. But Amy had been found alive much to her family’s delight. That was short-lived though when it was realised that Amy would never be the same again – completely unable to communicate and in a vegetative state, the horror of what had happened was intensified by the fact that Amy’s attacker was never found.Fifteen years later reporter Alex Dale discovered Amy’s story quite by accident. And she felt compelled to dig into Amy’s past and do her best to bring justice to Amy. Alex had her own demons though; her marriage had failed and her career had stalled. The alcohol which ruled her life had wrecked her life – so she determined she could work around it; still having her necessary drinks but setting her rigid schedule to include solving Amy’s cold case.Slowly Alex began to dig into the past – meticulously following every little clue and hoping she would find something the police hadn’t all those years ago. She interviewed Amy’s old school friends and her boyfriend from back then. Alex felt she was getting closer to finding out something which would break the case – but would she? Was she putting herself in dreadful danger as well? And could she save herself in the process of finding Amy’s abductor? - Goodreads.com