The Boy in the Black Suit 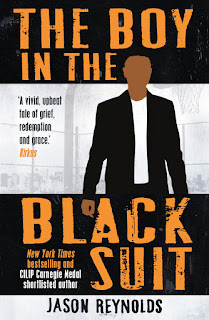 Genre: Young Adult, America- as you hear it on the news

Sometimes I open a book in the office and for a few minutes of skim reading. I want to get to know our books. A few times, I get lost in that book, time stands stil, students might be lining up for something they need, But Im gone, inside the covers of that book. It doesn't happen all that often- but it just did with this one!!!!
It is very very good!

“And sometimes,” he continued while flipping another one, “I can lose and lose and lose and I don’t know why. But there’s nothing I can do but just keep flipping the cards. Eventually, I’ll win again. As long as you got cards to keep turning, you’re fine. Now, that’s life,” he said, pushing another hand I won over to me.”― Jason Reynolds, The Boy in the Black Suit

Matt wears a black suit every day. No, not because his mom died - although she did, and it sucks. But he wears the suit for his gig at the local funeral home, which pays way better than the Cluck Bucket, and he needs the income since his dad can't handle the bills (or anything, really) on his own. So while Dad's snagging bottles of whiskey, Matt's snagging fifteen bucks an hour. Not bad. But everything else? Not good. Then Matt meets Lovey. Crazy name, and she's been through more crazy stuff than he can imagine. Yet Lovey never cries. She's tough. Really tough. Tough in the way Matt wishes he could be. Which is maybe why he's drawn to her, and definitely why he can't seem to shake her. Because there's nothing more hopeful than finding a person who understands your loneliness - and who can maybe even help take it away.

"Matt is struggling to deal with the recent loss of his mother to breast cancer. His father isn't doing much better and begins drinking excessively which lands him in the hospital. While his father is recuperating, his neighbor Mr. Ray, a funeral director, keeps an eye on him and offers him a job. To Matt's surprise, he finds that his job offers him a certain sort of comfort in that he regularly encounters other people who are grieving.When a funeral causes him to cross paths with a girl he's been crushing on, Matt begins to heal and discovers a shocking past connection to the girl and her family.I LOVE this author's work! The characterization is strong (especially the dialogue), the setting is richly recreated and features an urban environment, and the twists are fresh and interesting. I really liked the coverage of grief in this book and in particular the conversation Matt and Mr. Ray have about life being like the card game War.I highly recommend this book for any readers who enjoyed When I Was the Greatest and enjoy character-driven stories about African American teens living in urban areas."- Samantha