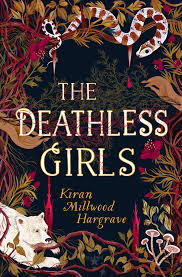 
Review taken from  Sara on Goodreads

"The Deathless Girls is part of a series from Bellatrix focusing on the girls forgotten to literature. Those female characters that have been sidelined in epic stories to allow others to shine, and have been lost in the background. But more than that, this is a story about female love and relationships. It’s full of sisterly love, a sapphic romance, the brutality of life and to top it all off - vampires. Kizzy and Lil are 17 year old traveler twins who are captured and sold into slavery. Kizzy is the beautiful twin, who soon attracts the attention of the local Lord. Full of fire and light, she refuses to succumb to her fate. Lil sees herself as the more dowdy twin. Always in her sister’s shadow. But when Kizzy catches the eye of the wrong man, it’s left to Lil to fight for her.

It’s Kizzy and Lil’s relationship that pulls the story along, and holds everything together. Their love feels genuine, all consuming and entirely reliant upon the other. Kizzy isn’t whole without Lil, despite their obvious differences. All the other characters pale into insignificance compared to them, including the various love interests- which both feel rather sudden and slightly underdeveloped. That said, the sapphic relationship is sweet and delicately portrayed. The villains are also very one dimensional, although I came to deeply loathe them, without any ambiguity to them.

The overall plot is good, and is well written and fast paced. This is a relatively short book, sitting at just over 300 pages, and the story is quick to read. Because of this however, the plot feels like it’s missing any real depth to it - as though we’re really jut skirting around the edges of what could have been a more epic adventure. I wanted more substance to really get to grips with the sister’s story. The ending is also rather rushed, with our main antagonist only really showing his face for the final act.

A good story of female love, but I wanted (pardon the pun), more bite. "