Abina and the Important Men 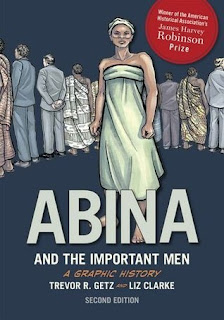 This one will get me going as well. Set in Ghana- a nation close to my heart, it is about a woman who is wrongly enslaved and eventually she takes the 'important men" to court.
Isn't everyone wrongly enslaved- who has been rightly slaved?
I have been to the door of no return in Elmina Castle on the Cape Coast in Ghana. That place is haunted- I tell you! It is a small door where the 'slaves" would walk through onto the boats to take them away so there bodies could be used as machines to do work for free, I felt sick and gutted that  due to my heritage somehow I was related to that evil scheme. I guess the redeeming feature of that experience was I went with a bunch of amazing Ghanaian school kids- 25 of us in a minivan- and those kids played in that castle, laughed, ran- redeeming its story in part. The slavery of their forebears was matched with spontaneous freedom and joy by a bunch of kids running up the same stairs and playing on the beaches with delight- the same beaches that carried away their people a century ago.Perhaps ignorance is bliss!
Still Abina had a different story- not one of freedom and wave jumping
This is the story of Abina Mansah--a woman "without history" who was wrongfully enslaved, escaped to British-controlled territory, and then took her former master to court-- it takes place in the complex world of the Gold Coast at the onset of late nineteenth-century colonialism. Slavery becomes a contested ground, as cultural practices collide with an emerging wage economy and British officials turn a blind eye to the presence of underpaid domestic workers in the households of African merchants. The main scenes of the story take place in the courtroom, where Abina strives to convince a series of "important men"--a British judge, two Euro-African attorneys, and a jury of local leaders--that her experiences and perceptions matter. "Am I free?" Abina inquires. Throughout both the court case and the flashbacks that dramatically depict her life in servitude, both the defendants and members of the court strive to "silence" Abina and to impose their own understandings and meanings upon her.