Simon vs. The Homo Sapiens Agenda 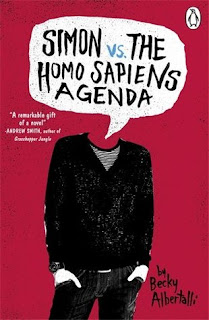 Yesterday 50 people died in a violent shooting based on hate, judgement and bigotry. We have no right to act in hate and terror and destroy any life for reasons of opinion.
This blog is written in honor of those 50-

"America's worst shooting slaughter, with 50 dead and 53 wounded victims in hospital, is the perfect political storm that combines the hot-button issues of a highly charged presidential election campaign – terrorism, gay rights, Muslims in the US and gun control.
US President Barack Obama calls the attack that killed 50 people at an Orlando nightclub an "act of terror and hate" and calls for prayers for the victims and their families."

Sixteen-year-old and not-so-openly gay Simon Spier prefers to save his drama for the school musical. But when an email falls into the wrong hands, his secret is at risk of being thrust into the spotlight. Now Simon is actually being blackmailed: if he doesn’t play wingman for class clown Martin, his sexual identity will become everyone’s business. Worse, the privacy of Blue, the pen name of the boy he’s been emailing, will be compromised.

With some messy dynamics emerging in his once tight-knit group of friends, and his email correspondence with Blue growing more flirtatious every day, Simon’s junior year has suddenly gotten all kinds of complicated. Now, change-averse Simon has to find a way to step out of his comfort zone before he’s pushed out—without alienating his friends, compromising himself, or fumbling a shot at happiness with the most confusing, adorable guy he’s never met.
“And this gay thing. It feels so big. It's almost insurmountable. I don't know how to tell them something like this and still come out of it feeling like Simon. Because if Leah and Nick don't recognize me, I don't even recognize myself anymore.”
― Becky Albertalli, Simon vs. the Homo Sapiens Agenda