We Are The Ants 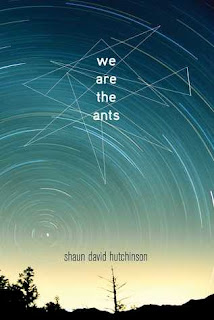 It has all the makings of a magical novel: characters of diverse sexuality and race, a focus on mental health, and some interesting tidbits of science fiction.

“Depression isn't a war you win. It's a battle you fight every day. You never stop, never get to rest.”

"Your entire sense of self-worth is predicated upon your belief that you matter, that you matter to the universe. But you don't. Because we are the ants."

"Dreams are hopeful because they exist as pure possibility. Unlike memories, which are fossils, long dead and buried deep."

"I'll die, you'll die, we'll all die, and the things we've done, the choices we've made, will amount to nothing."

If you knew the Earth was ending and you had the opportunity to press a button that could stop the Earth’s destruction, would you? Would you press it without hesitation? Or would you think about it? For some of us, the answer is easy of course they would press the button! For others the answer is not so simple, some may even consider not pressing the button at all. Henry is our main character and he is probably one of the realist characters I have ever read. He is not the perfect main character. He has the opportunity to save the world, that’s something main other YA characters would have done without hesitation. But you know what, he isn’t sure he wants to save the world. He’s not sure the world is worth saving or that he is worth saving. He has gone through so much in so little time, his boyfriend killed himself without an explanation, his grandma is slowly losing herself, his brother is a jerk, and his mom is barely keeping it together. He is constantly bullied and ridiculed by his classmates. It should come to no surprise that Henry doesn’t want to save the Earth. - Tina- Goodreads.com
Henry is left with the ultimate choice: push the button and save the planet and everyone on it…or let the world—and his pain—be destroyed forever.

What a fantastic, thoughtful, painful look at grief, loss, and the meaning and purpose of building a life that means something to you. It's about love and friendship, about family, and it's also about mental illness and when you know you need to get help because you're ill -- because it's an illness, not a flaw in your personality. It's also a book about bullying, about what drives us to act, and about the depth each person has to who they are and what it is they love and do.- Kelly